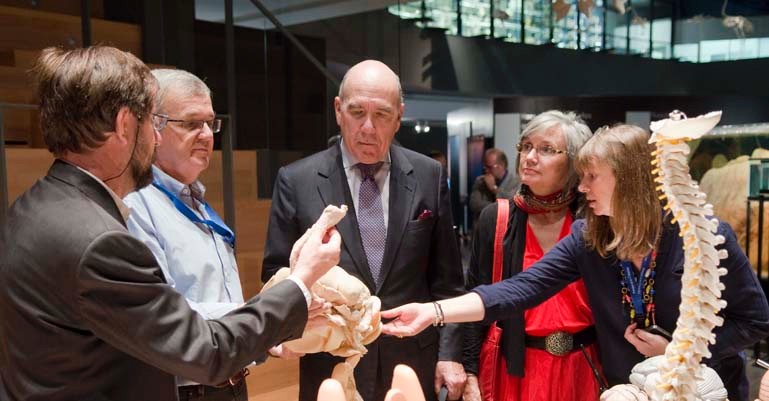 The President of the Field Museum of Natural History, Richard W. Lariviere, was welcomed by the Vice-President of the Consortium and Mayor of Granada, José Torres Hurtado, before being taken on a tour of the Parque de las Ciencias

The Parque de las Ciencias and the prestigious Field Museum in Chicago, USA are working on a collaboration agreement for future international projects. The news was confirmed this morning by the President of the Field Museum, Richard W. Lariviere, during his visit to the Parque de las Ciencias. Mr Lariviere was welcomed by the Vice-President of the Consortium and Mayor of Granada, José Torres Hurtado, and was excited about the quality of the museum’s exhibits and its capacity to accommodate large international exhibitions.

Mr Lariviere was shown around by the Director of the Parque de las Ciencias, Ernesto Páramo, and had the chance to see some of the museum’s most important projects, such as the upcoming "Mummies: Eyewitnesses to the Past" exhibition, the future Biodome and the plastination of organs to be exhibited and used for educational purposes. He was particularly impressed by this last line of work, describing it as "very interesting", because the elements plastinated in the Parque de las Ciencias Laboratory could be exhibited in museums anywhere in the world.

And it is precisely that international scope of the museum that was highlighted by Mr Lariviere, who said it would be a very positive aspect when it comes to setting up joint initiatives. In addition to being a European leader in scientific dissemination, the Parque de las Ciencias already plays a prominent role in ECSITE (the European Network of Science Centres and Museums). The museum’s Director, Ernesto Páramo, is a member of the Board of Directors of the Network, which is made up of more than 400 institutions in 50 countries.

During his tour, Mr Lariviere visited the museum’s Journey Through the Human Body and Risk Prevention halls, as well as innovative spaces like the "Window to Science". He also wanted to find out about the day-to-day work carried out at the Parque de las Ciencias, visiting its offices and different departments.

The Field Museum is one of the largest natural history museums in the world. Founded more than a century ago, it attracts up to two million visits annually, and its researchers publish an average of 205 papers each year. The Field Museum’s collections consist of over 24 million specimens and objects, and its library contains around 275,000 books focused on biology, geology, ethnology, archaeology, and so on.

However, what makes the Field Museum most unique is that it is home to the largest, most complete and best-preserved Tyrannosaurus rex fossil yet discovered.